Mining in Africa has a long history. For over 2000 years iron ore and other metals have been mined in North Africa. Iron mining began in sub-Saharan Africa around 500 BC and had spread throughout the region by 200 AD.

The African continent is home to plentiful natural resources including diamonds, cobalt, oil, natural gas, copper, and gold among others.

Some examples of African countries that are rich in minerals are:

60% of mining in Africa is Gold Mining.

The Mponeng Mine located south-west of Johannesburg in South Africa is currently the deepest pit in the world. 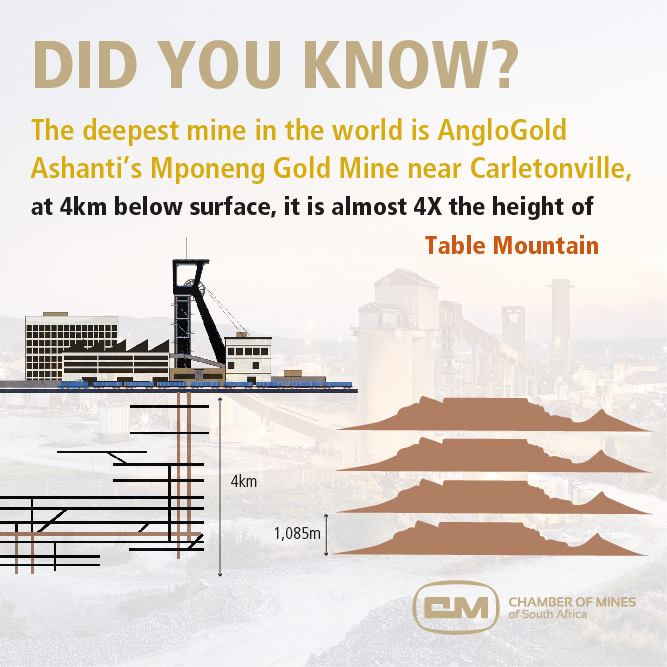 Botswana heads Africa’s list of diamond miners, housing seven well-established mines including Jwaneng, the world’s richest in terms of value, Orapa, the world’s largest by area, along with Karowe and Letlhakane.

Ghana has cemented its position as Africa’s largest gold producer after increasing its industrial gold output by 6% in 2019.

The Big Hole in Kimberley is considered one of the deepest cavities excavated by man. From mid-July 1871 to 1914, 50,000 miners dug the now famous Big Hole (then called the Kimberley Mine) in Kimberley with picks and shovels yielding 2 722 kilograms of diamonds. The hole has a surface of 17 hectares (42 acres) and is 463 meters wide. It was excavated to a depth of 240 meters, but then partially infilled with debris reducing its depth to about 215 m. Since then it has accumulated water to a depth of 40 meters, leaving only 175 meters visible.

To produce a single one-carat diamond, 250 tonnes of earth needs to be mined 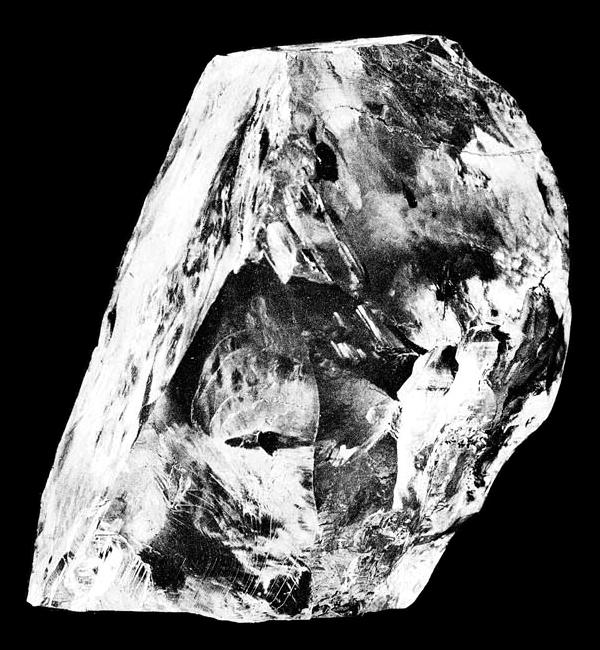 Leads 2 Business currently has 417 active mining projects on our database and growing.

View our Project Infographic: Mining – Africa 2020 and get the inside scoop

Get the inside scoop… 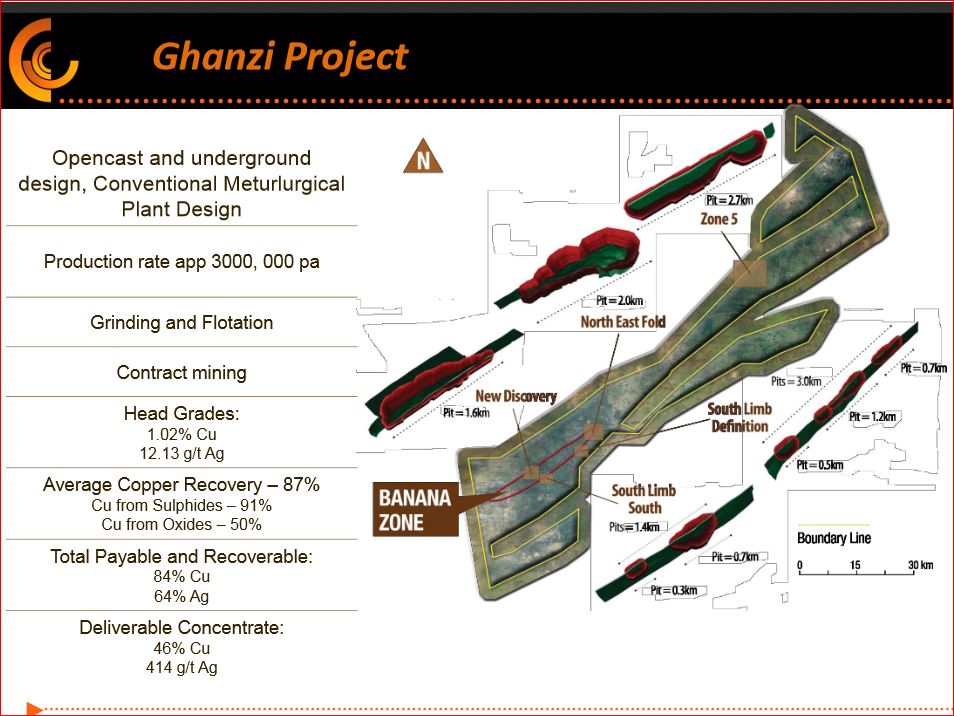 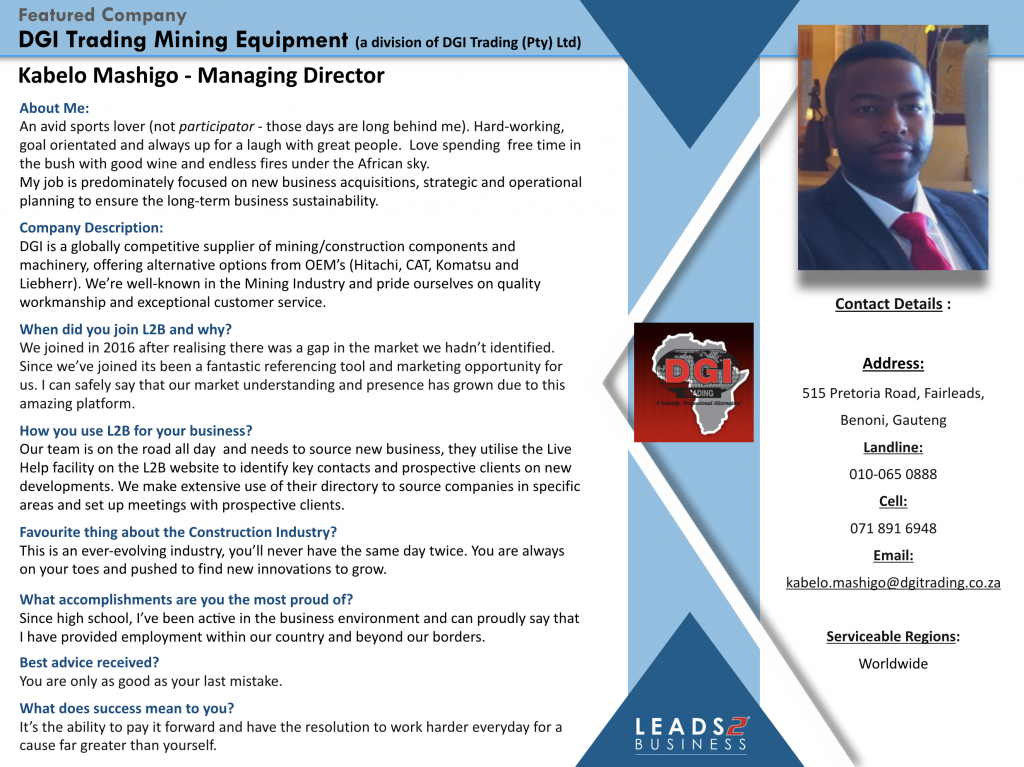 I am Ashlee Kelly and I have been with Leads 2 Business for a year and 3 months. Although new to the Company I have been in the construction industry for 4 Years. My passion is working with clients and ensuring that they grow their business in the right direction by getting involved in projects and tenders we can offer. I am a very out-going person with many characteristics, and love to help when a client needs any assistance.

The KZN Construction Expo is the only multi-disciplinary show for Kwazulu-Natal’s built environment focusing on buyer and seller engagements through free-to-attend content and face-to-face interactions under one roof. With thousands of attendees ranging from small contractors through to architects, quantity surveyors, property developers, government and industry associations this is an unprecedented opportunity to access KZN’s building and construction value chain from project owner to contractor in a unique setting allowing for prestigious visibility, interactive networking and on-site demonstrations. 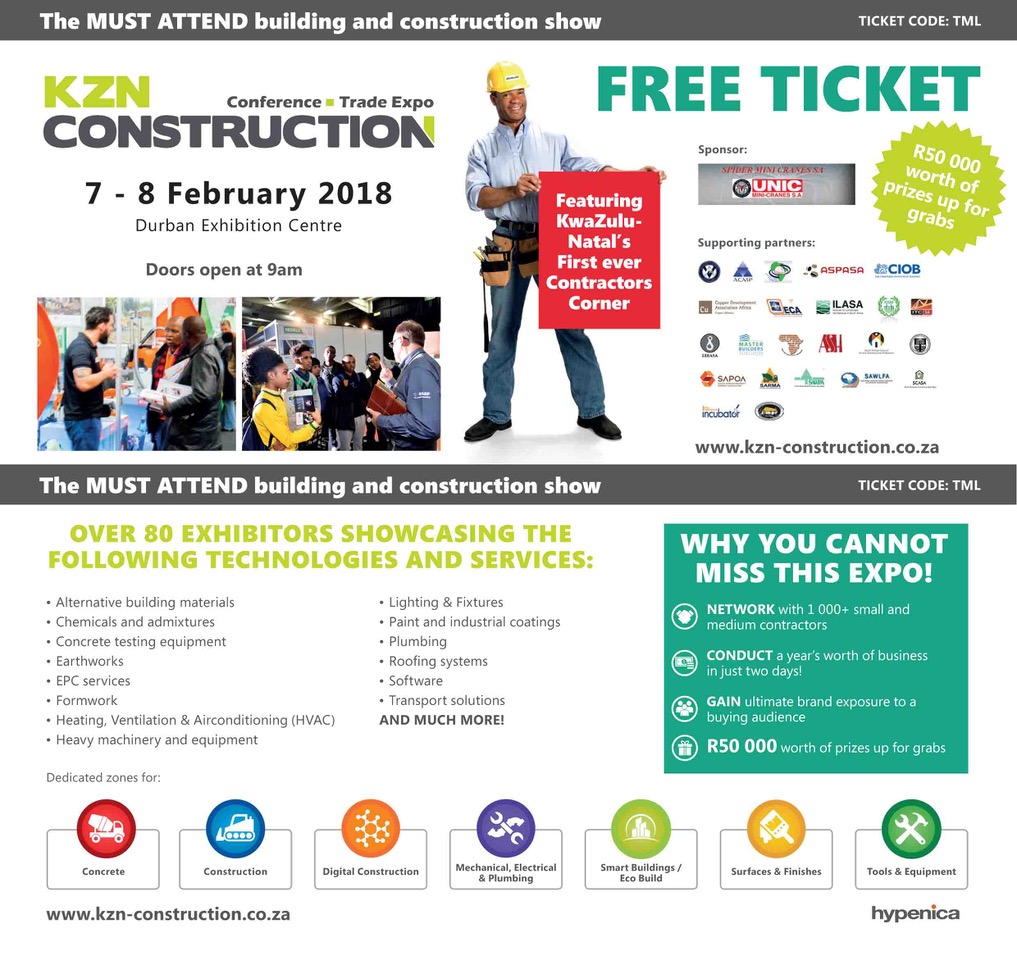 Investing in African Mining Indaba is solely dedicated to the successful capitalisation and development of mining interests in Africa. Located in Cape Town, South Africa for over 20 years, this event unites investors, mining companies, governments and other stakeholders from around the world to learn and network, all toward the single goal of advancing mining on the continent. Also known as Mining Indaba, we are dedicated to supporting education, career development, sustainable development, and other important causes in Africa.

The Mining Leaders Africa Summit allows you to engage and network with industry leaders from the mining communities from across Sub-Saharan, East, West and South Africa.

Focused Sugar, Agricultural and Industrial expo covering all sections of these industries. There will be over 20 suppliers showcasing their products and/or services to the top and middle management of the following operations (RCL Sugar Mill, Molatek Feeds Mill, local farmers and industry.  If you want to be part of this exhibition the mills are interested in any innovative technology on the processing side and any ways to improve the production process. The farmers are looking for agriculture related products.

Focused mining exhibition covering all sections of the mining process (Mining, Engineering, Processing). Over 30 suppliers showcasing their products and/or services to the top and middle management of the following mines and operations (Barberton Mines, Agnes Gold Mine, Strathmore Mines, Nkomati Anthracite Mine, Nkomati Mine, Manganese Metals and Sappi Lomati Mill and local industry) If you want to be part of this exhibition the mines are interested in any innovative technology on the processing side and any ways to improve the mining process. These mines are looking at improving their operations through efficient products and innovation.

The My Broadband Conference, held on 26 October 2017 at Gallagher Convention Centre, is the premier ICT event South Africa. Attracting top IT executives and professionals, The MyBroadband Conference promises to be the biggest and best conference yet, with speakers from all the major telecoms players in the country.

Description: The Boikarabelo coal project is located in the Waterberg area of the Limpopo Province. Boikarabelo has probable reserves of 744.8 million tonnes of coal – an increase of 108.8 million tonnes, making it one of the largest remaining coal deposits in the country. The Boikarabelo coal seam is between 20 metres and 30 metres below the surface, enabling low-cost, open-cut mining. The seam is between 120 metres and 130 metres thick, with zones of varying quality thermal and soft-coking coal. Phase 2, planned for 2018, will involve ramping up production to 20 million tons of product coal. The estimated capital cost for the project is $480 million.

Timing: First coal production is expected in the first quarter of 2019.

Notes: Resgen said it had experienced a slight delay in financial close of the project. The mid-December approvals target represents a “slight slippage” in Resgen’s preferred timeline to develop the mine, but the company said that, if achieved, it meant financial close would likely be reached by March 2017, with the Boikarabelo mine producing its first coal in the first quarter of 2019.

If you are a valued Projects subscriber, you can find more details click here http://www.l2b.co.za/Project/Boikarabelo-Coal-Mine-Limpopo/8677 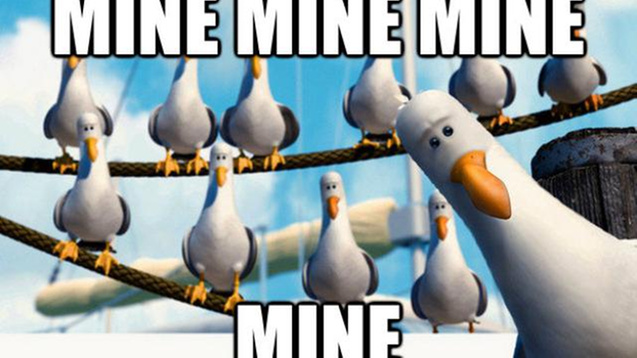 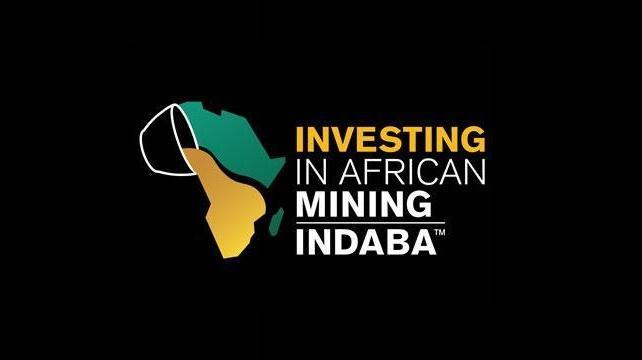 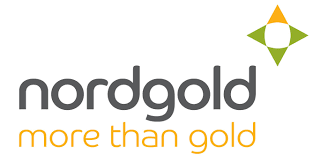 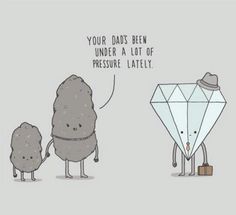