Port Elizabeth, situated in the Eastern Cape Province, this major seaport is set along the dazzling shores of Algoa Bay and is fondly referred to as the Friendly City and the Windy City.
Port Elizabeth was established in 1820 and was incorporated as a town in 1861.
Port Elizabeth is a popular international and local holiday destination and has a rich and diverse cultural heritage.

Here are 7 of Port Elizabeths most impressive buildings:

Also known as the Donkin Street Houses, these restored buildings form a row of terraced houses, each lower than the one preceding it. Although built as individual units, they are remarkably well-integrated into one single unit, and erected on land that was reclaimed from a deep kloof (valley). The unique houses were built between 1860 and 1880 and are now an important landmark in Port Elizabeth, forming part of the Donkin Heritage Trail. Their pretty Victorian and Georgian features are much admired and photographed by visitors to the city. 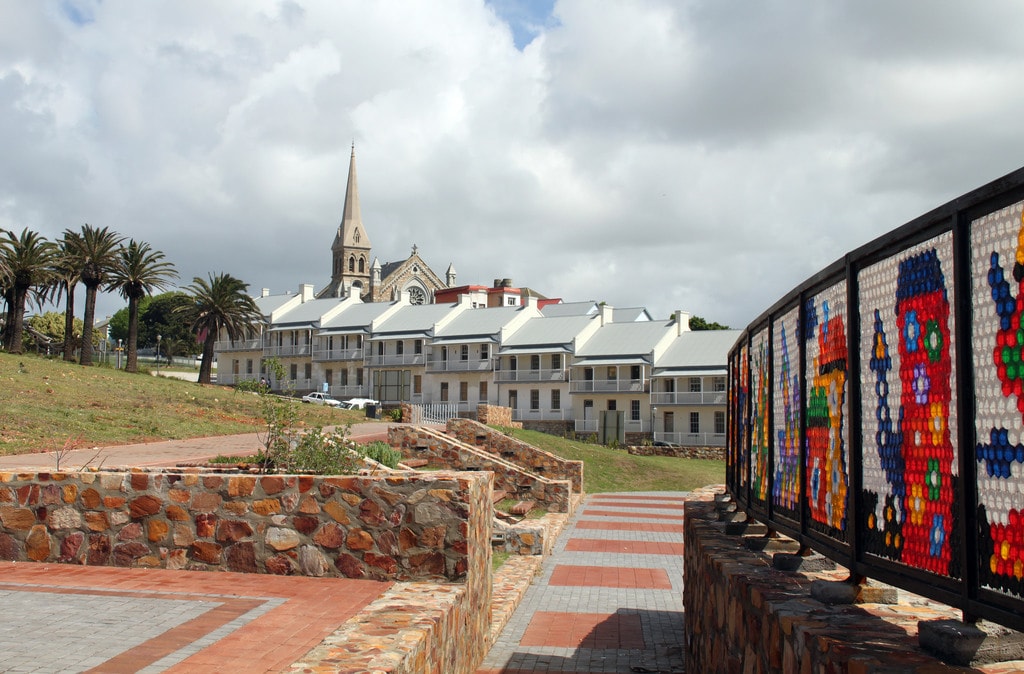 This prominent structure was recently given a face lift but was built between 1921 and 1923 to commemorate the arrival of the 1820 settlers. Standing at just over 50 metres (164 feet) in height, the Italian-styled brick tower boasts a 204-step spiral staircase that leads to a viewing platform. Those who don’t think they will manage the steps, can take the easy way up in the lift. The Campanile also contains the largest carillon of bells in the country, that collectively weigh some 17 tonnes, in addition to its chiming clock. 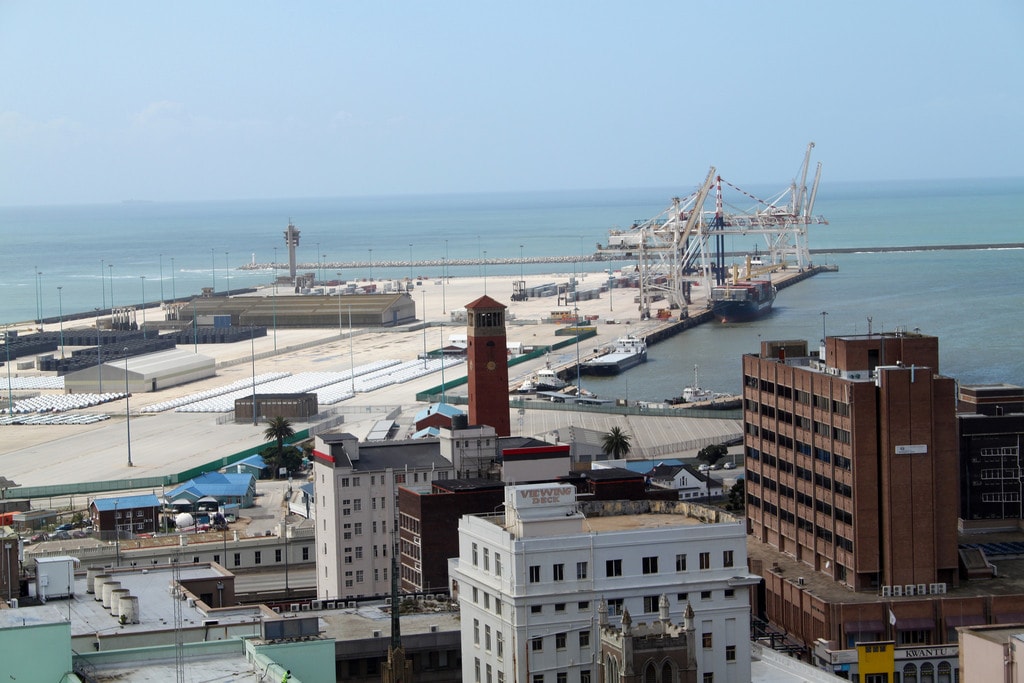 This grand old building was built by architect Henry Cheers of Twickenham, England and is an excellent example of Victorian Gothic Revival architecture. It is the only historic building in South Africa built as a public library that is still used for its initial purpose, and visitors can explore its hushed, book-lined interior at their leisure. The main interior space, the Savage Memorial Hall, features a superb, domed rooflight, stained glass windows, and two levels of narrow galleries running around it. 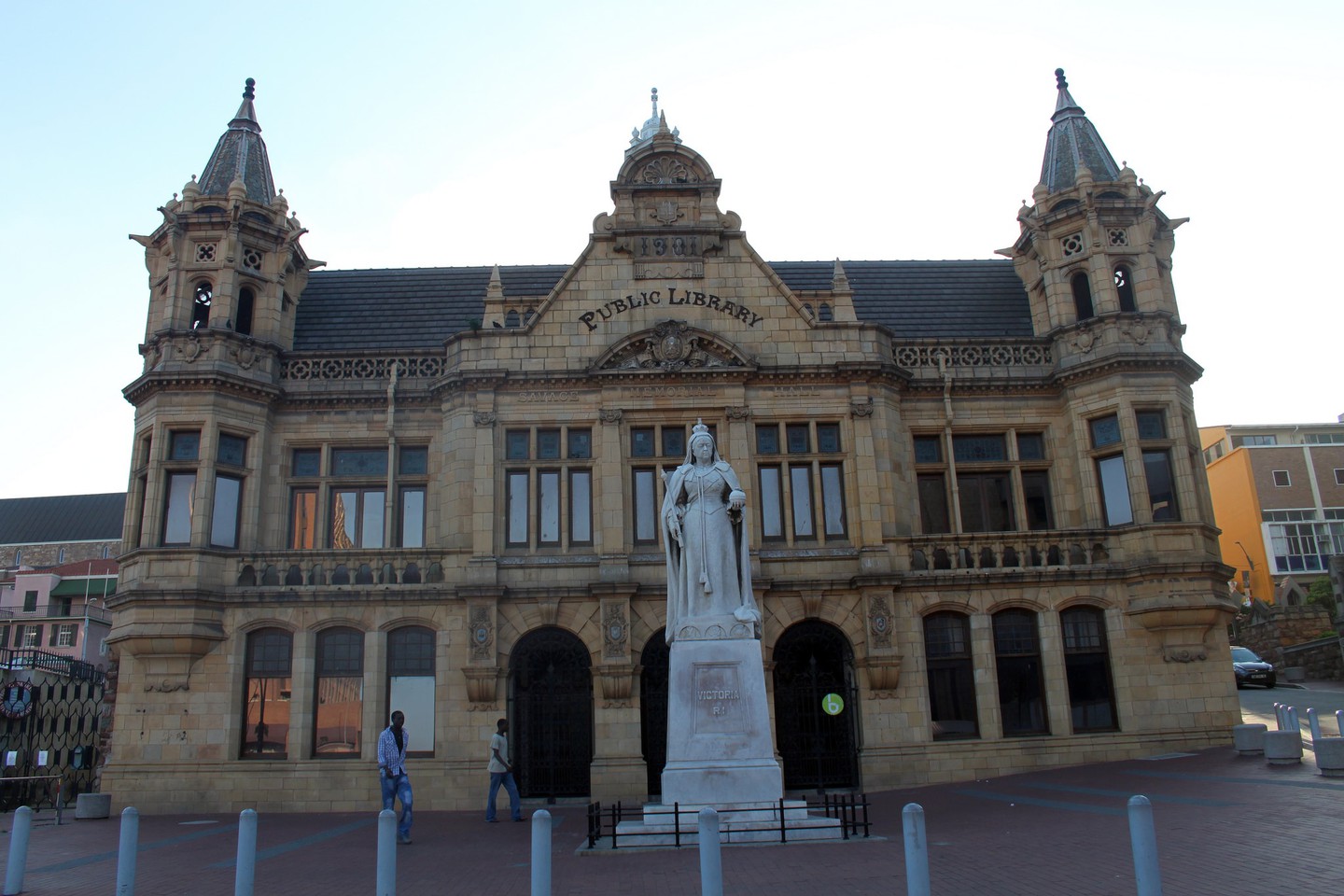 Initially built to host soccer games during the 2010 FIFA World Cup, the state-of-the-art Nelson Mandela Bay Stadium is one of the largest and most easily recognisable landmarks in Port Elizabeth. The five-tier structure lies on the shores of the North End Lake in the centre of the city and offers panoramic views of both the North End Lake and the ocean. The design of the stadium was based on the shape of a flower, with petal-like panels making up the open roof. 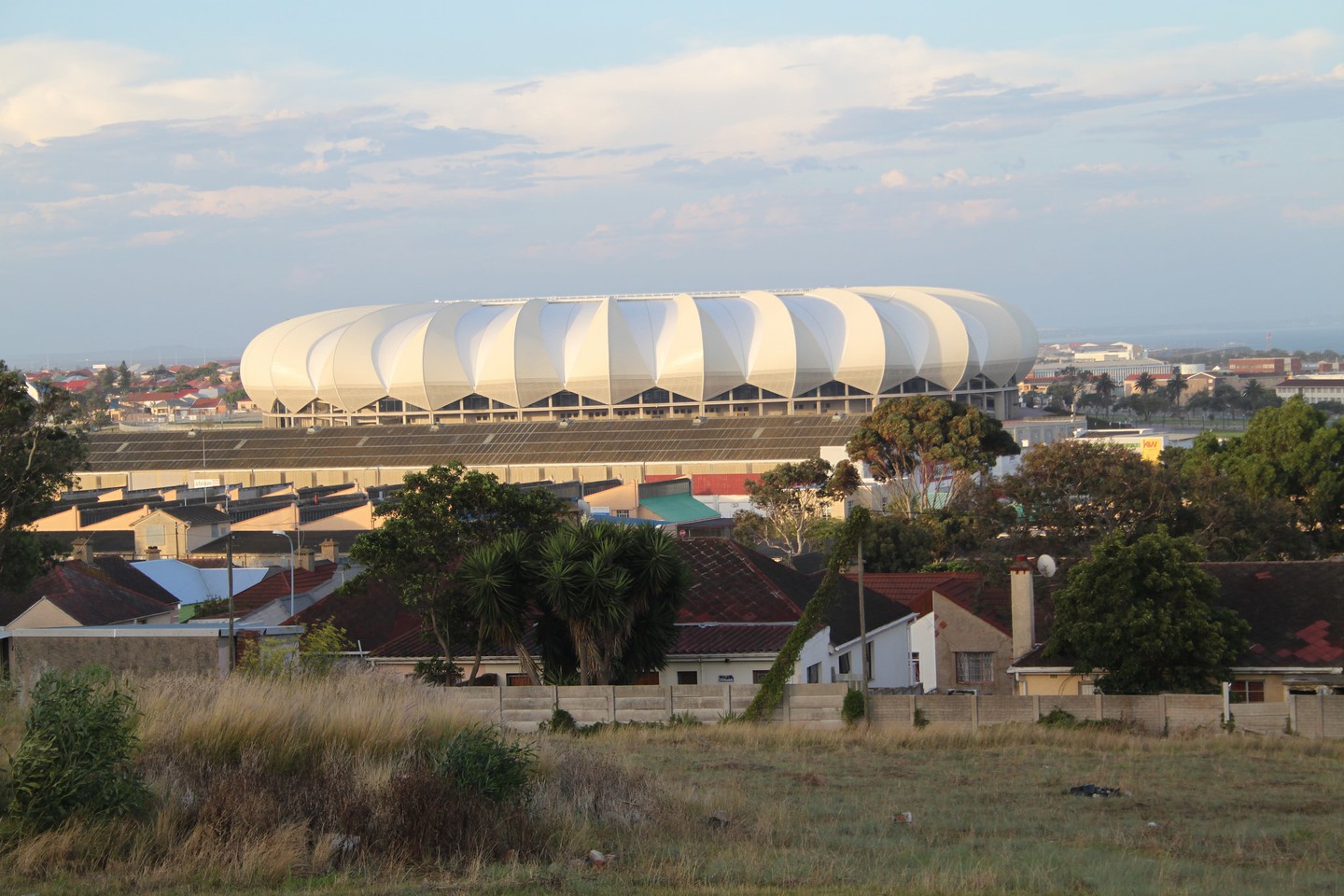 The Port Elizabeth Opera house is the only surviving example of a Victorian theatre in South Africa and is still to this day the main venue for dramatic productions in the city. It also holds the title of oldest theatre in the entire Southern Hemisphere, making its architectural style unique and of great historical importance. The Opera House has seen many famous South African artists past through it and is also shrouded in ghostly stories, as it is built on the site of old gallows where public hangings took place in years gone by. 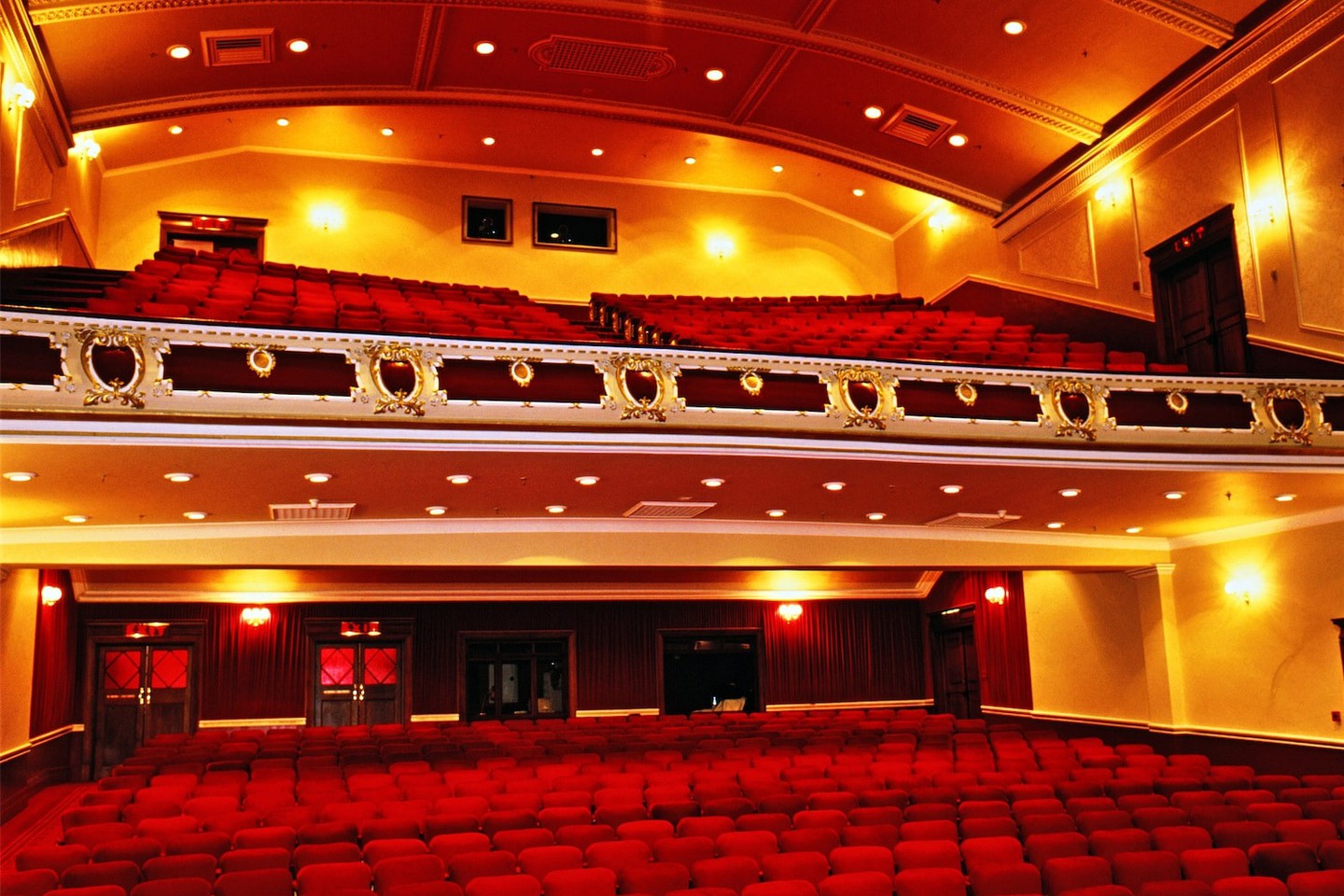 The Port Elizabeth Railway Station is located in the historical central district of the city, close to the harbour. It was built in 1875 and designed by James Bisset, the resident engineer for the harbour and other public works. In 1893, a cast iron roof was added to the main concourse and the Victorian station received a complete refurbishment in 1985. The original design comprises a double-storeyed building with three arched doorways that led to the booking office and, beyond that, to the platforms. Except for some internal alterations, the external architectural features of the buildings haven’t changed much since the turn of the century. 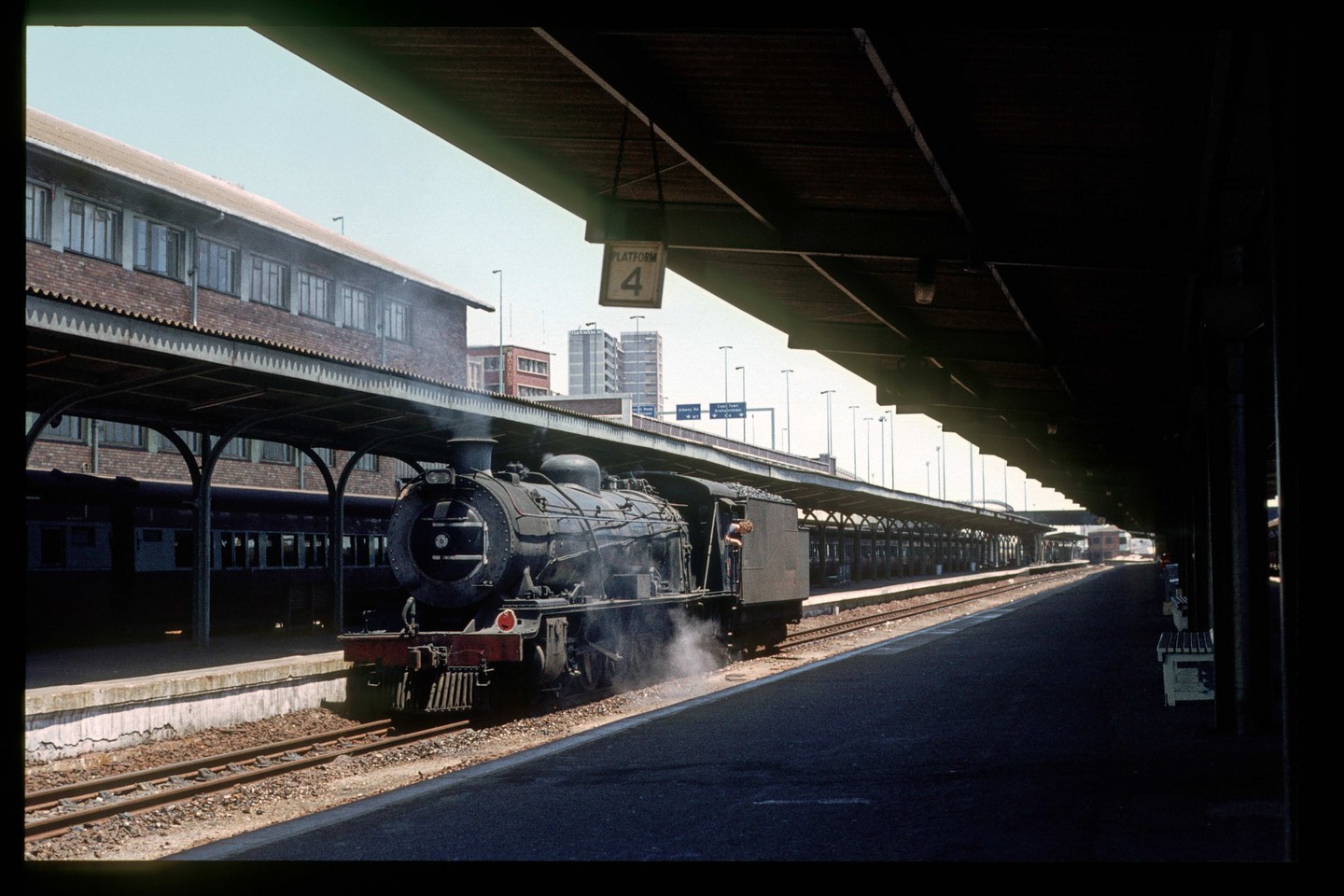 The Masjid-ul-Aziz Mosque, commonly known as the Pier Street Mosque, is a landmark that all Port Elizabeth residents are familiar with, as it stands out brightly in all its green glory, adjacent to the busy Settlers Freeway. The mosque was officially opened in July, 1901 and was almost destroyed during the days of Apartheid when the Group Areas Act was declared. Fortunately,  the matter was taken to the United Nations, where Islamic countries prevented its destruction and the historic mosque remains in daily use as a place of worship by the Muslim community. 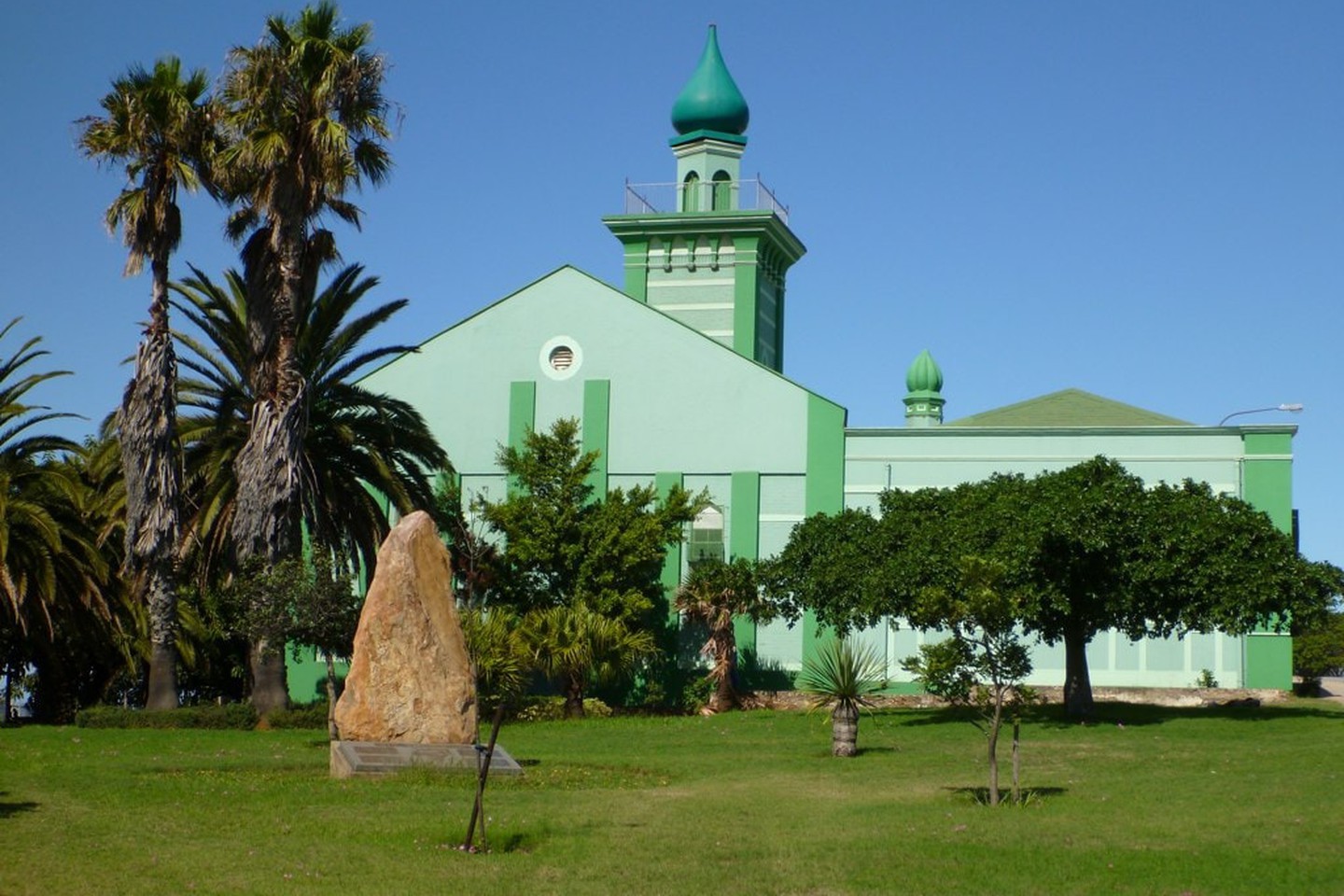 My name is Lola Govender. I have been working at L2B for 9 years and am very passionate about our business. 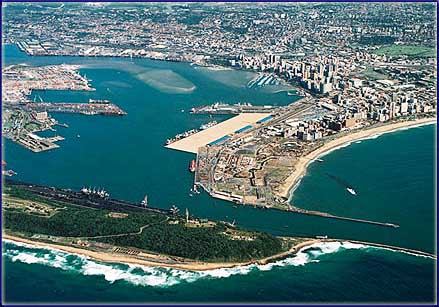 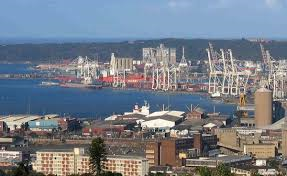 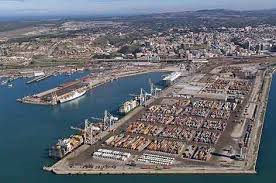 According to a Port Development Plan by Transnet National Ports Authority (TNPA), dated September 2014, various developments have been listed for the Ports currently under the TNPA’s care and control, namely Western Ports: Saldanha Bay, Cape Town and Mossel Bay; Central Ports: Port Elizabeth, Ngqura and East London and Eastern Ports: Durban, New Durban Dig-Out Port and Richards Bay. Below is a brief breakdown of some of the activity at South African’s various Ports.

Port of Saldaha Bay – In 2013 with the aim in increasing the iron ore export from the Port of Saldanha Bay, Transnet proposed a third tippler and associated infrastructure, for which Gibb (Pty) Ltd were appointed as the Independent Environmental Assessment Practitioners. The tender for the Construction of Vault, Tunnel, Buildings and Ancillaries for Transnet Tippler 3 Project at the Port of Saldanha was advertised at the end of July 2015 (DTA 525896) and is expected to close on 08 September 2015.

Port of Cape Town – The Request for Proposal for the New Cruise Terminal Facility at the Port of Cape Town was advertised in December 2014 (DTA 487279), and in June 2015 the announcement by Transnet National Ports Authority (TNPA) was made of the preferred bidder being V & A Waterfront (Pty) Ltd. According to the media statement, the V & A Waterfront will invest just under R179 million to finance, design and develop the terminal and the agreement includes the operation, maintenance and transfer of ownership of the facility back to TNPA after a period of 20 years. Currently, V & A Waterfront are in negotiations to sign the lease, and it’s expected that any development will only commence after May 2016.

Port of Ngqura – Manganese Export Expansion Project at the Port of Nguqura involves the upgrade and expansion of the rail network, new bulk minerals export terminal and the reinstatement of existing berths. Infrastructure will comprise new roads, infrastructure services and buildings as well as new equipment: stackers, reclaimers, surge bins and an unloading system (tippler), a conveyor system linking the stockyard with existing berths and these berths will be equipped with twin shiploaders. The tenders for the Port of Ngqura Manganese Export Terminal (DTA 444247) as well as Phase 2 of the Rail project (DTA 444237) were advertised April 2014. The tender for the Design, Supply, Installation and Commissioning of 2 Shiploaders for the Ngqura Manganese Export has been advertised in August 2015 (DTA 527882) and ix expected to close on 22 September 2015. The tender for Design, Supply, Installation and Commissioning of a Rotary Dual Wagon Tippler Facility including Supply and Installation of Apron Feeders, Dust Extraction and Suppression Systems, for the Ngqura Manganese Export Terminal is also out (DTA 527873) and also closes on 22 September 2015. Port of East London – In July 2014, it was announced that the Coal terminal at the Port of East London would move to the new Port of Ngqura and be operational in approximately five year’s time. Future development that might be expected is the extention to the Port of East London to include an expanded container terminal, refurbish liquid bulk facilities and boat building.

Port of Durban – The Request for Proposal for the Design, Development, Financing, Construction, Operation and Maintenance and Transfer of the New Cruise Terminal Facilities at the Port of Durban was initially advertised in June 2013 (DTA 382061). No award was made and it was advertised again in July 2015 (DTA 524504) The RFP is expected to close on 02 October 2015.

Durban Dig-Out Port (DDOP) – “From 2019 to 2042, Transnet will embark on its medium-term projects, which includes the new dig-out port. The new harbour will be built at Durban’s old International Airport and will require the construction of: a breakwater and entrance channel; a 16 berth container basin and terminals; and a new automotive terminal, among other infrastructure”. So far the driver for the DDOP remains the same, demand will exceed capacity at the existing Port of Durban by ±2025. Although nothing has advanced beyond the planning stage, the current view is that the first phase should be operational by 2025. (PPA 10166)