To the seasoned traveller, Bloemfontein holds a whole array of history and exciting facts. Being known as “The City of Roses” attests to the beauty the city holds as well as holding a little fame for being the birthplace of J.R.R. Tolkien, the author of The Lord of the Rings Trilogy and The Hobbit. But to the unseasoned traveller, little may be known about this city except perhaps that it is the Capital of the Free State and that it borders on the semi-arid region of the Karoo. If you’re looking for some historical insight and a city that will not disappoint, Bloemfontein is not to be missed on your next road trip. Listed below are 5 historical buildings that are an absolute must on your next South African adventure! 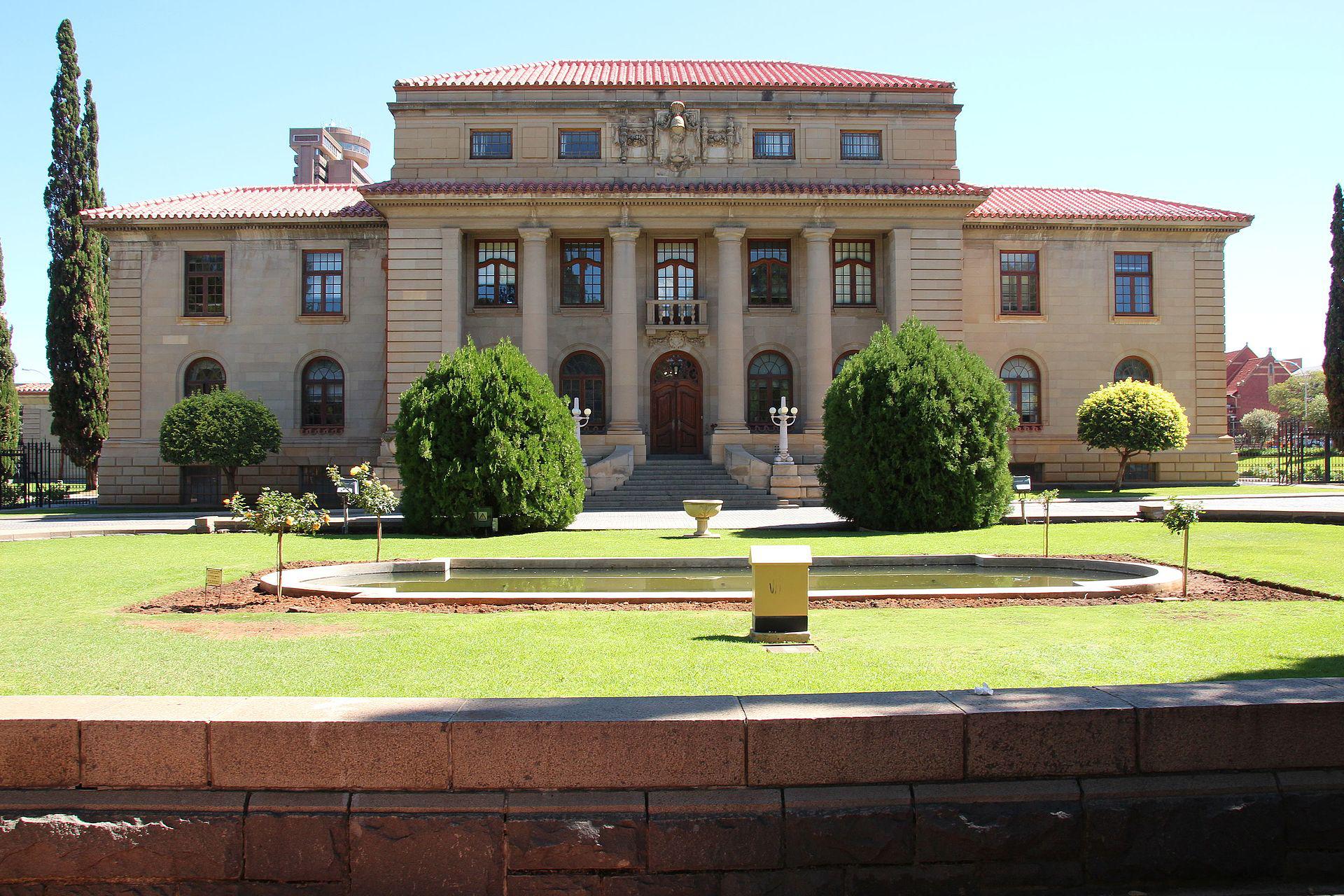 Bloemfontein is the judicial capital of South Africa. The Court of Appeal building was built in 1929 and is the highest court. The Court of Appeal is also known as the Supreme Court of Appeal where the final decisions are made. Except for the Constitutional Court, no other court rules over it.
The original building was designed in a free Renaissance style by J S Cleland, the Chief Government Architect, who was also responsible for many other major public buildings in South Africa. The oldest part was built with sandstone from Ladybrand, the newer western wing with sandstone from Ficksburg, and the latest extension with sandstone from Mookgophong in Limpopo. On each occasion, the extensions were constructed to preserve the style and appearance of the building as far as possible. 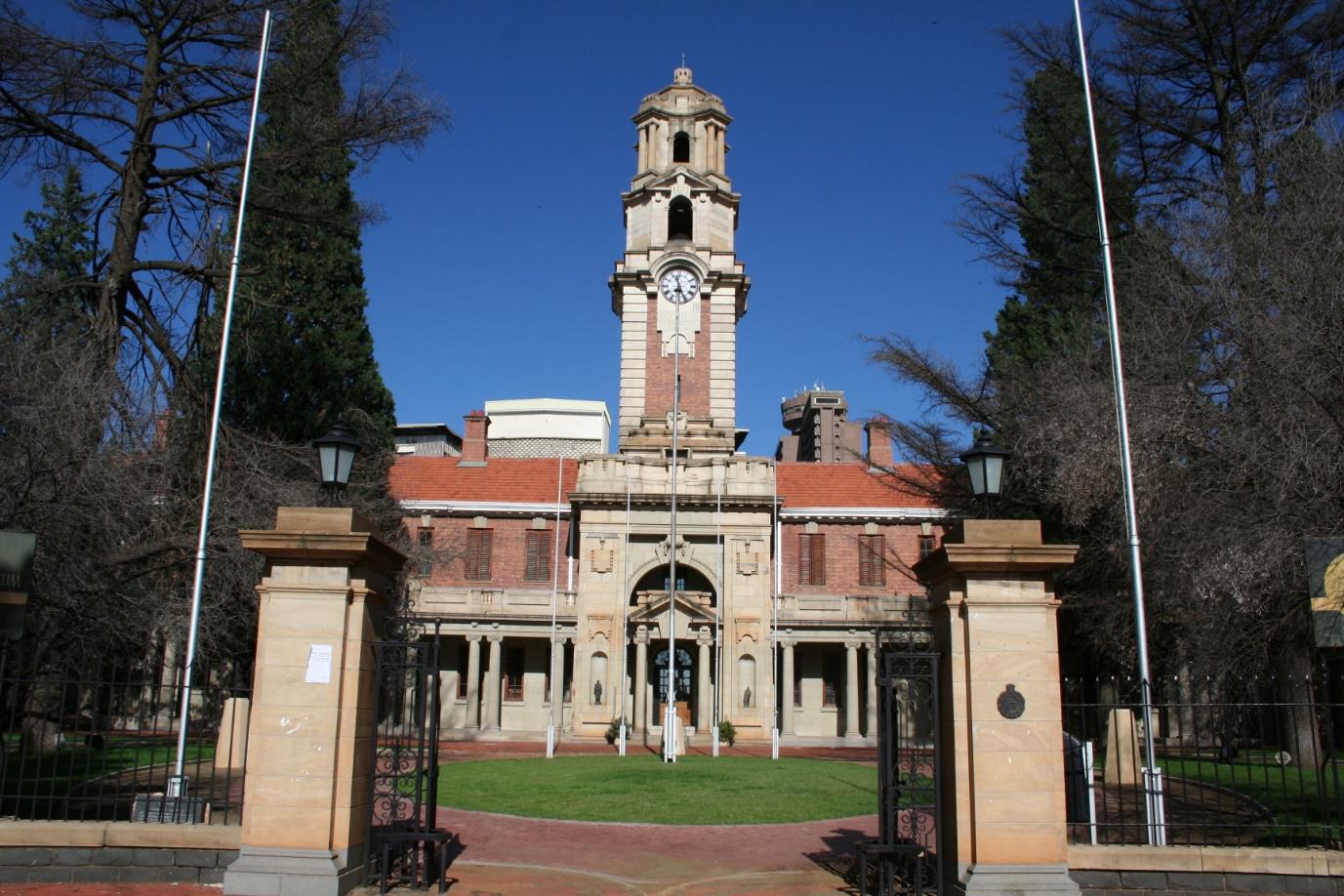 The National Afrikaans Literary Museum and Research Centre is a central archive for material and information on the history, development, and scope of literature, music, and drama in the Afrikaans language. The NALN was founded in 1973 by the Free State provincial government and is based in Bloemfontein, South Africa. NALN is located in the Old Free State Government Building. The building housed the various government departments of the Orange Free State government. The first story’s front facade was designed by Richard Wocke and the keystone was laid by President Brand on May 31, 1875. In 1895, the second story was built, designed by Johannes Egbertus Vixseboxse. The remainder of the building was designed by Sir Herbert Baker, an architect of the Union Buildings in Pretoria, and was completed in 1906.
On October 28, 1908, the original building was destroyed in a fire. From 1909 to 1911, it was largely restored based on Baker’s blueprint. Improvements were the work of the government architect F. Taylor. The tower was, among other things, narrower and 10.5 m higher than the original one, and was fitted with a rounded crown.
From 1877 to 1902, the Old Government Building was the headquarters of the Government of the Orange Free State. The Free State Volksraad met in the Third Council Chamber from 1877 to 1893. Afterwards, it remained the seat of the Government of the Orange River Colony, and in 1911 became the provincial headquarters of the Orange Free State. In 1972, the building was declared a national heritage site.
The Human Sciences Research Council began mounting exhibits in the building and using it as an archive for documents on language and literature in 1970. The document archive developed into the Literary Museum of Bloemfontein. On October 9, 1972, the Administrator of Free State, announced the establishment of the NALN. On March 24, 1973, the NALN was officially opened by Johannes Petrus van der Spuy, at the time Minister of National Education.

Bloemfontein City Hall is a building in Bloemfontein which houses the local city council. The building was completed in 1936 and burned by vandals in 2017. The building lies on President Brand Street downtown next to the Supreme Court of Appeal of South Africa and facing Hertzog Square. The building is a sandstone structure designed by Gordon Leith. The city hall has a large room, the council meeting room, behind its eastern entrance. The entrance on President Brand Street is designed symmetrically with two towers. Pillars give the east entrance neoclassical elements. Over the symmetrical entrance hang signs indicating Stadhuis and City Hall. Above these lie the former city coat of arms.
During the 1980s, new municipal offices were opened alongside the building. Even after municipal government changes in 2000 and its 2011 reclassification, the local government has continued to use the town hall.
On June 21, 2017, vandals set the building on fire. The fire was lit during a protest by the South African Municipal Workers’ Union held at the building earlier during the day. The municipal archives in the building were lost in the fire. 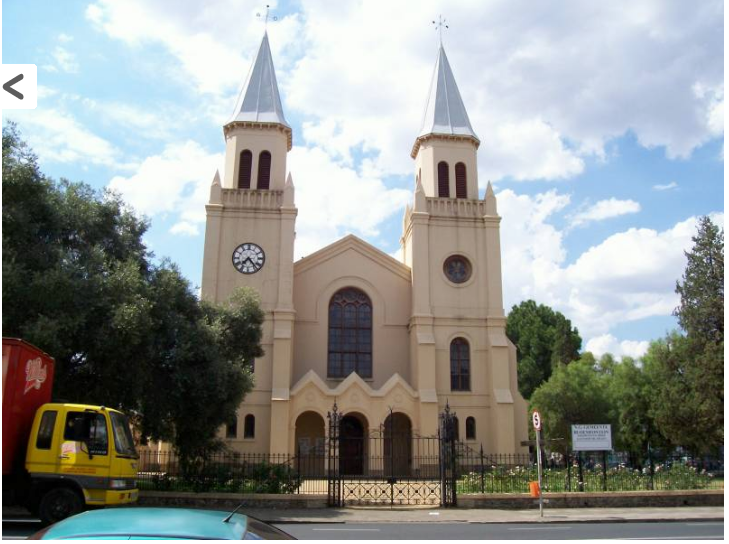 Established on 13 November 1848, The Dutch Reformed congregation, also known as the Tweetoring Kerk, held its services initially in the Raadsaal, a humble thatched building in St George’s Street. On 6 January 1849 Major Henry Warden, the British Resident Administrator, laid the foundation stone for a new church and, at the same time, presented a bell to the congregation.
The building was only completed on 29 May 1852. By 1862, it had grown too small for Bloemfontein’s needs and the construction of a new hall was proposed. The project was only undertaken in 1874 when architect AW Wocker was commissioned to design a church. The old building was demolished whilst services continued to be held in a warehouse, owned by the firm of GA Fitchardt, immediately across the road.
President Brand laid the foundation stone for the new church on 10 May 1878, and on 7 May 1880, the new building was consecrated. The structure was notable for its twin spires and is commonly known amongst citizens of Bloemfontein as the Tweetoring Kerk. Unfortunately in April 1935 the western spire, including its clock, collapsed. Following fears that the second spire could also fall, both towers were shortened at the height of the church roof and given shorter pointed steeples. Following extensive structural restoration, by the end of 1942, both spires had been restored to their former height. A subsequent fire in 1952, set by an arsonist, fortunately, caused little structural damage, and the building was declared a National Monument under old NMC legislation on 15 February 1963. 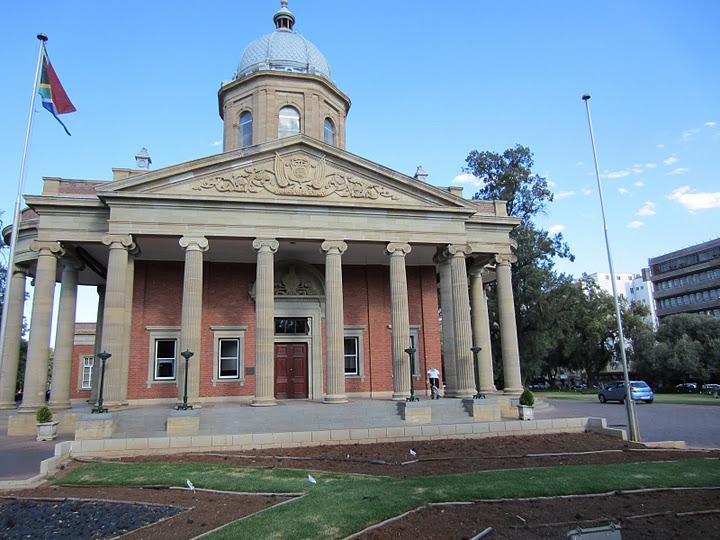 The Fourth Raadsaal is a historic building in Bloemfontein, South Africa, which serves as the meeting place of the Free State Provincial Legislature, the legislature of the Free State. It is located opposite the Supreme Court of Appeal in President Brand Street. In the early 1880s, it was resolved to build a new presidency office and chamber council. The designs for both buildings were awarded to Johannesburg-based Lennox Canning. The new presidency office was completed in 1886, yet work on the chamber council had not begun until 1889 by another Johannesburg-based architect, TR Robertson. President Francis William Reitz laid the foundation stone on 27 June 1890. Due to construction issues, another tender was awarded to JJ Kirkness. The new building was formally inaugurated on 5 June 1893 when the members walked from the old chamber to the new one.
In March 1900, British forces occupied Bloemfontein and the building became a military hospital. Most of the furnishing were acquired and are now in private homes. The Orange River Colony became the legitimate government in 1907. The colony had a two-chamber legislature consisting of a council and a legislative assembly. The lower council continued to meet in the Raadsaal, while a separate building facing Aliwal Street housed the upper house. In 1910, the Union of South Africa was formed and the Raadsaal housed the provincial council. The chamber and its rooms were occupied by the Appeal Court until its own premises was ultimately built in 1929. After the first non-racial elections in 1994, a decision was taken to house the newly-established provincial legislature in the building.

As one can see, just from the 5 historical buildings mentioned here, Bloemfontein is a city teeming with culture and is immensely rich in heritage. The buildings and museums reflect a historical journey and make Bloemfontein one of the most important cities to visit in the history of South Africa.