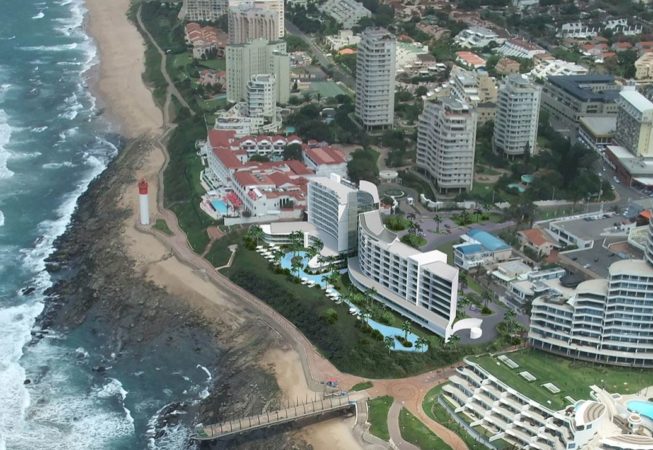 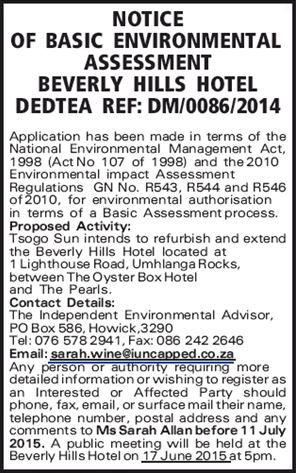 Description :  Construction of services and infrastructure for the refurbishment and extensions to the Beverly Hills Hotel, located at 1 Lighthouse Road in Umhlanga Rocks, KwaZulu-Natal. A multi-storey extension will be constructed to the north of the existing Beverly Hills Hotel at the same height as the existing Hotel, over Erf 3128 Umhlanga Rocks (Porritt House), Erf 1 of 260 Umhlanga Rocks, and proposed Remainder of Portion 1 of Erf 3132 Umhlanga Rocks. The re-development of the Beverly Hills Hotel will include: 2 levels of basement parking; fine dining restaurant/s; all-day dining restaurant/s; function venue with meeting rooms; spa treatment centre; 130 guest suites (existing rooms will be converted to suites); sky bar / function venue; atrium linking existing tower with northern extension of the hotel; demolition of Porritt House; removal of a number of coastal red milkwood trees of varying ages and other vegetation; development of a public amenity possibly including fast foods kiosk/s adjacent to the existing promenade along the seaward boundary on Erf 641 Umhlanga; re-roofing / beautification of the sewage pump station on Erf 654; and development of on grade off-road parking off McCausland Crescent. Estimated GPS Coordinates, as per Google: -29.727373, 31.087911.

Notes: The demolition of the last free-standing house along the uMhlanga Rocks promenade has begun. The house will be reduced to a shell by the end of the weekend, with the full demolition of the house to be complete sometime next week.

If you are a valued Projects subscriber, you can find more details at PPA 8017.