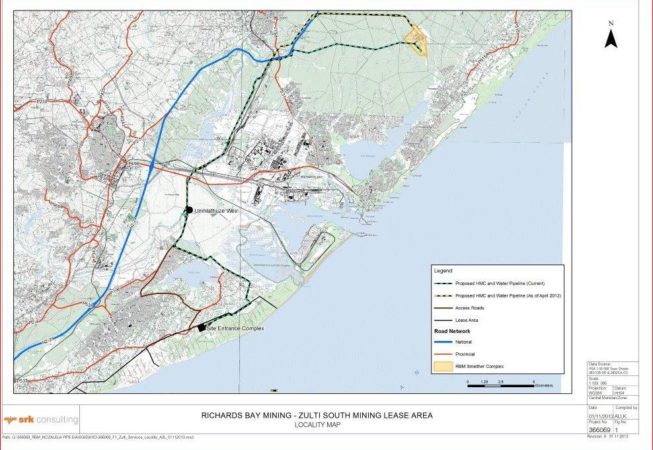 Description: Richards Bay Minerals is proposing to mine heavy minerals from its approved Zulti South Mining Lease Area located along a 20km stretch of the KwaZulu-Natal coastline, south of Richards Bay and north of Port Durnford in KwaZulu-Natal.

Notes: Richards Bay Minerals (RBM) has taken the first step towards extending its operations over a 20km strip of coastline south of the town in northern KwaZulu-Natal. This follows the signing of a land use agreement with the traditional authorities that represent the host communities that live on the land. The plan is for Zulti South to come online in phases to maintain production levels of 200 million tons a year.The first ton of ore should be delivered to the smelter in November next year. Zulti South phase one, which includes setting up new dry mining infrastructure in the Port Durnford area, is set to come on stream in the next few months and will extract about 2 500 tons of heavy minerals an hour. Zulti South phase two is set to start operating in 2021 at a lower production level of 1 250 tons an hour. Tenders for labour and services for various construction projects were distributed earlier this year.

If you are a valued Projects subscriber, find the latest information on Zulti South Mining Project for Richards Bay Minerals