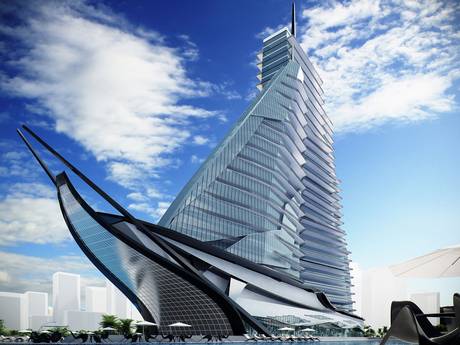 Description :  Construction of the infrastructure and services for a new mixed-use development to be known as Tunisia Economic City in Tunisia, North Africa. This new city is located in the Enfidha District which has been chosen for its strategic location, close to the Enfidha Al-hammamat International airport which can help initially to speed up the building of the city. The 90km² project with an 18 kilometer beachfront, depicting a modern, sustainable and eco-friendly metropolis will be the home of 500,000 inhabitants and will provide 250 000 jobs once completed within 15 years. Estimated project value : US$ 50 billion.

Notes: A Russian billionaire has designed a huge boat-shaped hospital for the new Dubai-style Tunisia Economic City. With four skyscrapers as the “sails”, it will sit on an artificial lake in the new city, which is being built in stages by the Tunisian Government. It will contain several international and local hospitals, a medical college, laboratories and facilities for exercise. The interior design for the hospital has not yet been completed but it can be completed within four years. According to Tunisia Economic City planners, it will be one of the first buildings constructed, in the “medical city” area.

If you are a valued Projects subscriber, you can find more details at PPA 15699.